Shiva, Vishnu and the virtue of acting on impulse

I have often been called impulsive, usually in a somewhat derogatory tone. It kind of ticks me off; often the actions that others label impulsive are the ones that are most completely authentic. My impulses are often a response to that native third eye instinct that somehow didn't quite get taught out of me by my white, lower-middle-class upbringing. They're the sign that I am, for once, actually listening to myself.

And so it was on an impulse that I pulled up outside Dr Rosie's clinic last week and, despite knowing full well that she was booked to the gills for weeks in advance, tried my luck at a walk-in. It certainly wasn't on my list of tasks for the day. But it suddenly seemed important.

And walk in I did, because her next patient was running late. Impulsive me: 10. Judgemental wankers: 0.

See, the black cloud hanging over me hadn't gone away. Despite my best efforts to exercise, eat well, sleep plenty, think positive thoughts and seek support from others in the same circumstances, my depression was hanging round and worsening. 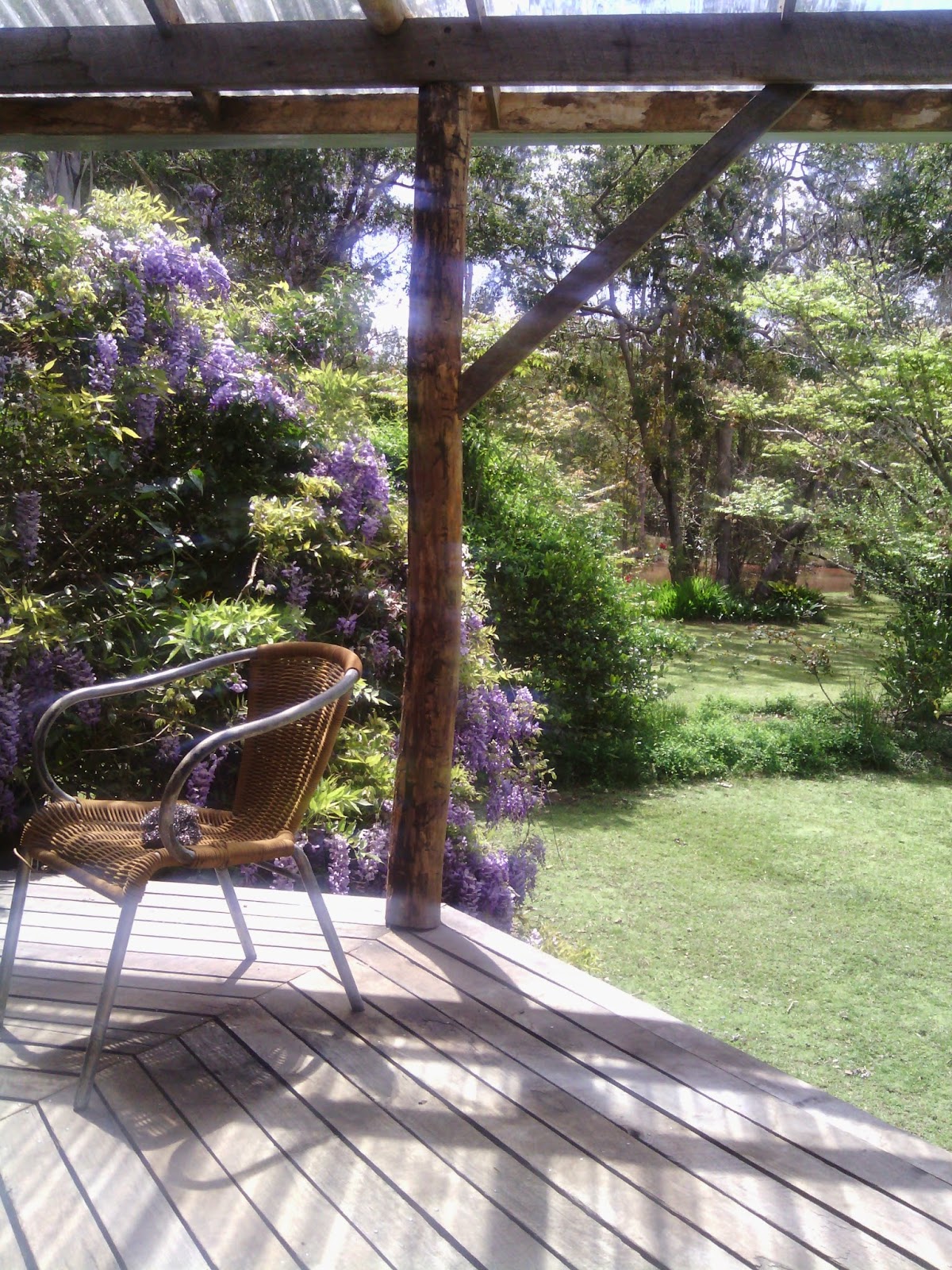 It didn't help that Shiva, Goddess of Destruction, had turned up last Saturday in the form of a vicious hailstorm centred on our property. One moment we had glorious sunshine, and the next we had Narnia.

I'd tagged my friend Angie in this photo on Facebook, nostalgic for relaxed mornings sitting on her veranda with good coffee and great chats. A few hours later, I sat in the same place on my great grandmother's rocking chair wondering what the fuck just happened. 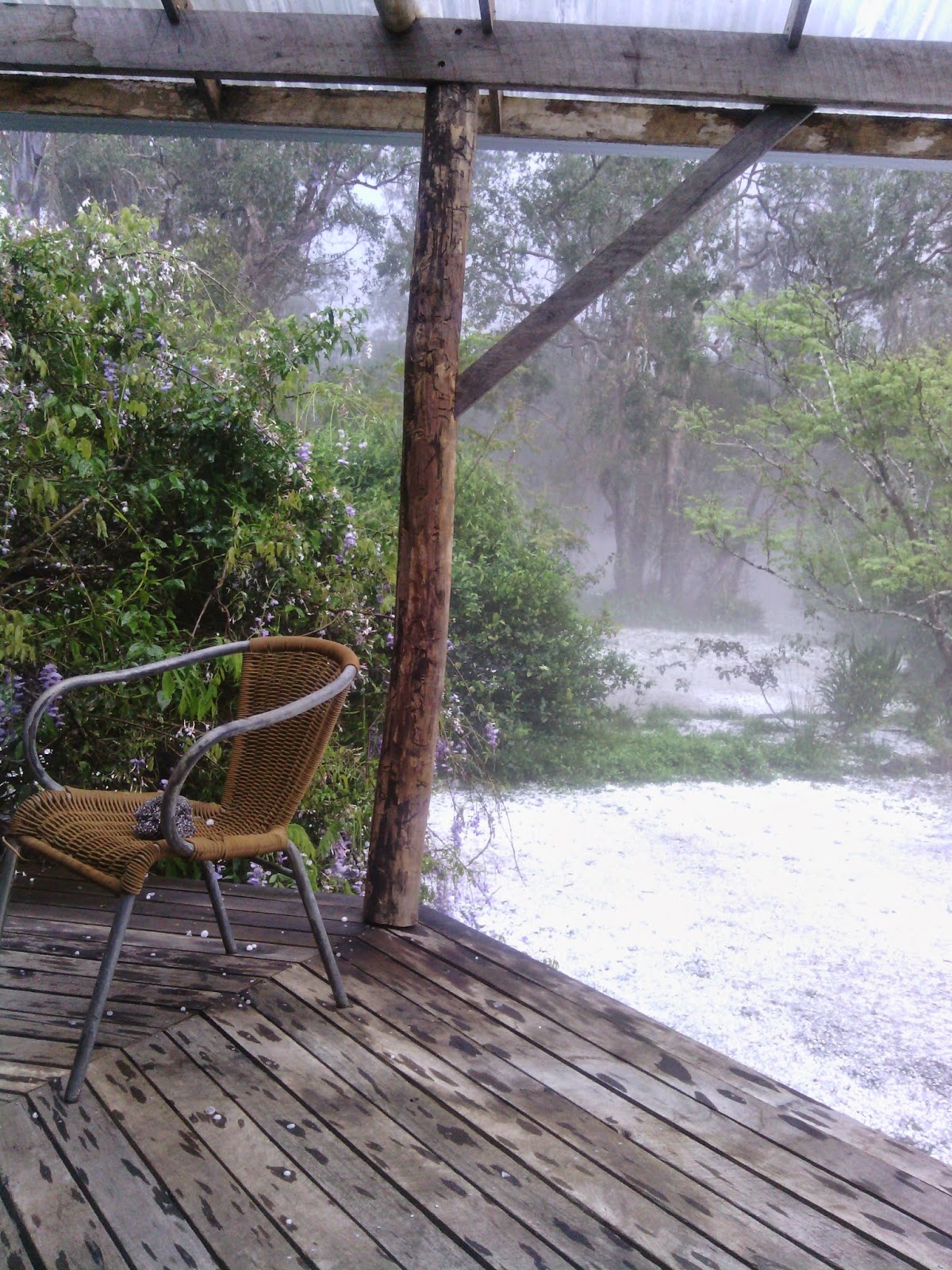 It was mind-bending. After ten minutes of sheer mayhem as ice pelted from the sky, often whipped sideways by a treacherous wind, the Bear and I wandered around in amazement, transported to an unfamiliar landscape which we may never see again. 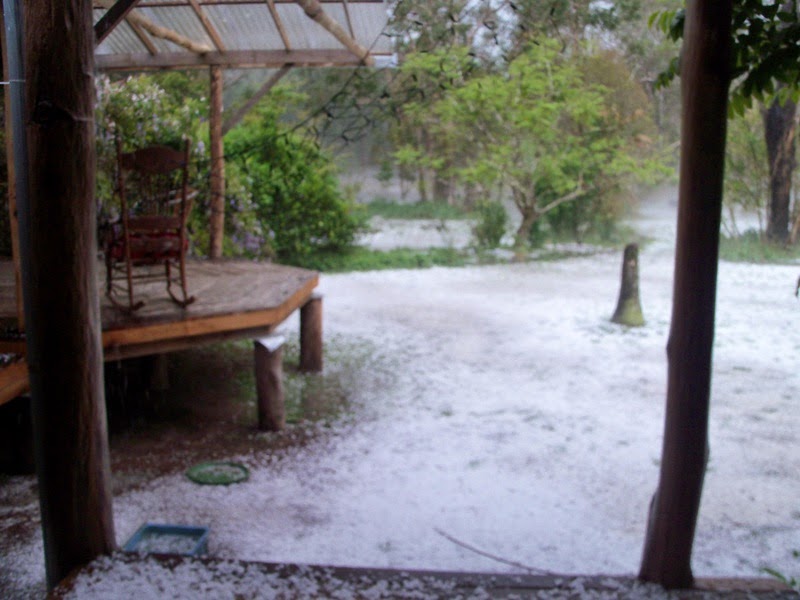 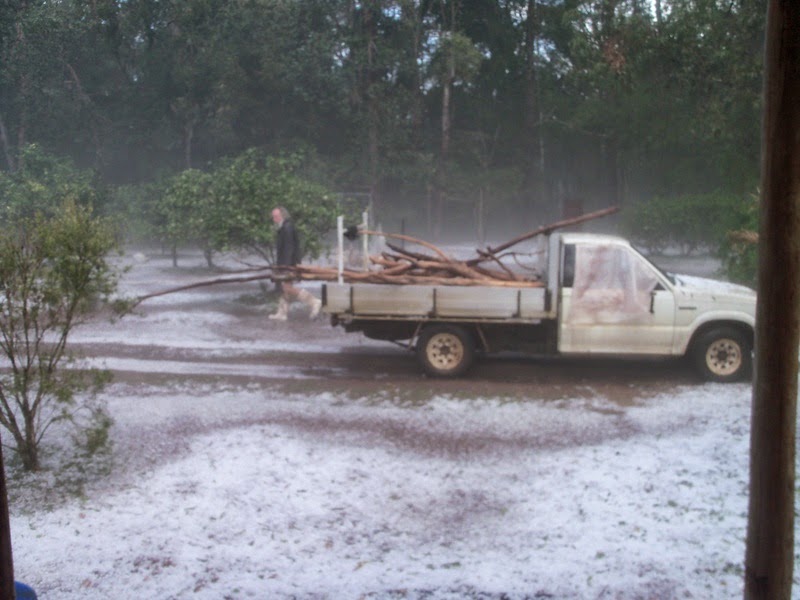 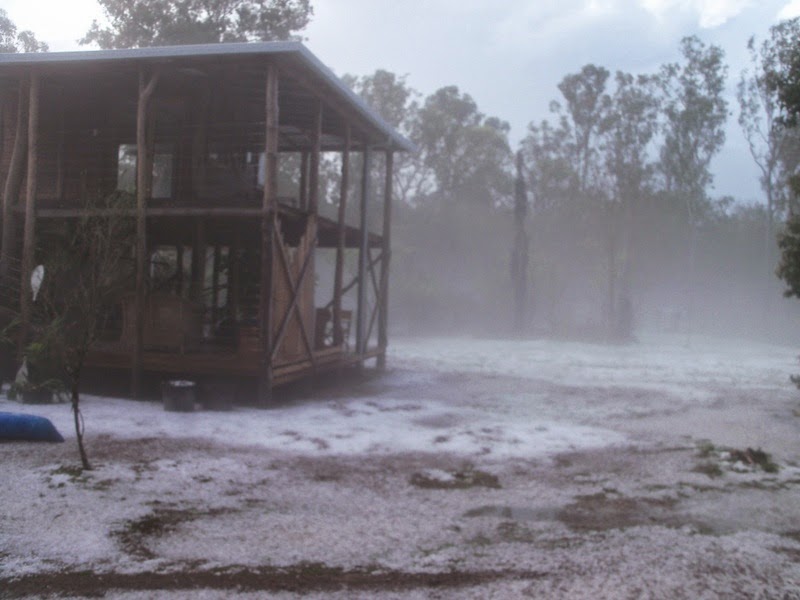 But, of course, once the sense of wonder wore off we headed miserably for our vegie garden, where we'd spent a good many days at the end of August getting the jump on spring.

We couldn't even see some of the plants under a good inch-thick layer of ice. There was, really, nothing left.

To say I felt picked on was an understatement. I'd really had to make an effort, weighed down as I was by misery, to put my mind and body into buying the makings of our spring garden and encouraging the Bear to get the beds ready. I knew that the sooner we had our own produce, the more likely I was to be able to eat a healthy summer diet. It all translates into that bottom line, surviving the Freeloader.

I want to live. But Nature, who has so often helped me stay rational, had turned on me.

In my fragile state of mind, it was all too much.

And so, impulsively, to Dr Rosie, who in typical left-of-centre fashion started in on the Hindu gods.

"Do you have spiritual beliefs?" she asked, after I'd rattled off the list of strategies that had failed to lift my gloom. "Do you believe in anything bigger than yourself?"

"Well, sort of, but I don't label it as a god. I believe we don't know everything, and anyone who pretends to is a fraud. And I believe in nature," I replied, "but even that isn't on my side at the moment."

I recounted the story of our own private hailstorm hell as she listened in wonder; even two properties away from us there had been only a few random hailstones, and in town they'd just had a little rain.

"Well, you know," she countered, "the Hindus believe that Shiva destroys to make way for Vishnu to create. You have to find a way to build from this."

And wrote me a script for Pristiq, because that's the sort of all-rounder she is. Always looking at the big picture, using conventional medicine as one of her many tools. I've never once walked out of her office with just a script, no matter how busy she is. There's always something to think about as well.

And so to Vishnu.

If, like Dr Rosie, I look at the big picture, then Shiva has been active in the guise of the Freeloader too. I see that some vital links have been destroyed between my Bear and me. All those months where I simply couldn't take part in farm life have led us to living very separate lives each day. He's become accustomed to doing all the heavy, dirty farm work by himself. I've become accustomed to doing my exercise, then falling in an exhausted heap and either entertaining myself with indoor tasks or resorting to my internet addiction. I can spend hours achieving absolutely nothing more than cooking the evening meal and making coffee, while he slaves away outside barely keeping pace with what has to be done.

Hardly a wonder that he's exhausted too.

How can I build something better?

The Pristiq, for all its side effects, does seem to be working. Despite the twitchy legs, the reduced appetite, the sudden-onset tiredness, I do feel lighter less than a week into the first script. Some people get exactly the opposite effect from that intended and get plunged into a suicidal state; luckily I don't seem to be one of them. The first night was pretty ghastly, complete with insomnia, nausea and such badly restless legs that I felt like I was back in the throes of menopause, but things have settled down quite quickly since then.

And so now I must be active to undo Shiva's work. I try to spend less time at the computer, though its siren song is always at the back of my mind; the numbness of my puzzle games is a great escape for a restless mind, which is all too quick to start ruminating on my lack of employment and my lack of breasts. I dragged the Bear unwillingly to town, where we visited the little seedling nursery together to buy some replacement stock for the garden. Poor Bear. If I was shattered by the hail, he had his hard-working heart broken. He loves his garden.

But the nursery was a hit. He immediately fell into a delightful conversation with the owner, and came home much cheered. And instead of leaving him to do the work of re-digging the beds and replanting, I made the effort to get out there and help. We've all but forgotten how to do things together. It's time to build that back up.

"Good to be in the garden with you," he says to me about every half hour.

And the twinkle in his eye reminds me of another crazy impulse, over ten years ago now, when I was standing next to a man I barely knew at a New Year's Eve bonfire. He'd recently taken up a tenancy in the cottage on the property I owned with my then-partner; we'd barely exchanged a word up till now.

"I'm going back to the valley tomorrow to see some old friends," the man said to me. "I might stay there."

I have no idea what happened next. There is no explanation for what came out of my mouth, and a less impulsive person would have crushed those words into oblivion rather than speaking them out loud.

That man became my Bear.