The pity party is officially over.

See, you can either stay where you are and feel sorry for yourself, or you can pick up your foot- either foot- and make the first step to somewhere else.

For an indecisive Libran like me, the biggest problem was deciding which foot to move first. Story of my life. My eggs have always been in too many baskets. My hat rack has always been full to overflowing. (And my oversupply of metaphors always in danger of falling into the mixmaster.)

Some say I'm over-imbued with talents, and others might view it as being a Jack-of-all-trades (with the usual rider). And so often, I've found myself in a state of paralysis, not knowing which path to follow to find some sort of fulfilment.

I could be writing. There are two blogs, two unfinished books and a growing series of children's stories to work on.

I could be applying for jobs, trying to get back into the childcare workforce and using my talents to help children.

And on, and on. I can make things, too. I can knit and sew and paint a little. I can sing and play and write music. All these ways of finding new wonder and joy in the world are at my disposal- and yet when the crazy of treatment abated at last, I fell into a black hole. I'd got myself healthy, I'd got myself into a fitness routine and was eating well, I was getting back to the normal level of daily tasks and I'd set myself some goals around the farm- and yet hopelessness was seeping in and settling around me. Every day was feeling the same.


Sure, I was spending half the day on Facebook doing good, trying to help other women with cancer come to terms with what I've been through, but that didn't seem to be enough to feed my need for meaning in my life. It was giving me some sense of purpose, sure- I wasn't just being a passenger in the ride to the end of time- but it still wasn't healing the scars on my soul.

What was I doing just for me?

It's not enough, you see, to just be there for everyone else. After a while of doing that, you start to feel hollow inside. The Bear calls it running on empty. He's been doing it himself for a while now. He really needs to go sailing; I wish somebody would find him a boat. That's his soul food, see. He's sitting here wishing Christmas Day was over right now, so impatient is he for the start of the Sydney-Hobart. He's read the programme till it's falling apart. Vicarious pleasure, given that his days of actually competing are long gone.

I can't fix it for him; he needs to do start the ball rolling for himself. I'm no sailor. I don't know the right people.

But many of his friends do. I wish to god they'd think to ask him how he is once in a while, instead of asking him how I am. I wish they'd see that cancer is a disease of the whole family unit, not just one person. I wish they'd open some doors and make it possible for him to heal himself.

That'll be the day.

I had an excuse for every single thing I didn't do to help myself, of course. I didn't have the concentration to write, or I was too tired, or I wasn't in the mood. I was too old to get work; who'd want me? And my hands don't work the same as they used to. They're a little arthritic. They hurt when I try to knit; heaven knows how I'd go on the guitar, as there's no strength in my left hand. My eyes are screwed so I can only sew in daylight. Painting? Meh, so much organisation.

The magic moment when it came was random, as magic so often is. A chance post on my Facebook wall by a friend I've never met, another rider on the Cancer Train. A song I'd forgotten I knew.

I didn't even play the video. I didn't need to. I realised the song was all there still, inside my head. I used to play it years ago when I was in college, when I was making a little money to supplement my teachers' scholarship by providing music for the patrons to ignore while they ate dinner in a local restaurant.

I didn't mind that they ignored me. Someone was giving me money to play songs I liked on the piano. That seemed like a miracle too, back then; most of my experiences of paid work had been pretty dire.

That song went round and round in my head all morning. Eventually it got too much for me. I dared raise the lid of my poor piano, sadly neglected for the whole year of my treatment. I knew it hadn't been tuned, despite the appallingly changeable weather and three floods. I opened it up anyway.

I dared put my fingers on the keys, despite knowing the tips were still a little numb from the peripheral neuropathy. Some of the Freeloader's gifts are permanent, it seems.

And I didn't have to try very hard to remember. 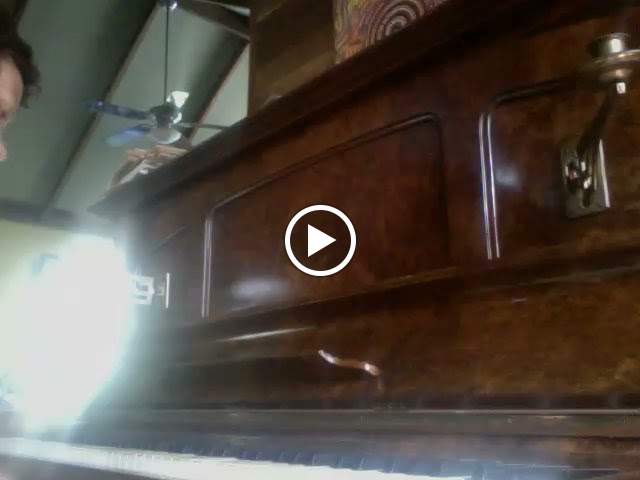 It didn't sound too bad.

Just for the hell of it, I videoed it. Something told me it was an important breakthrough. And then I uploaded it to Pink Sisters, so my friend could see what she'd done. So many of our actions have ripples we never know about; I wanted her to see that something good had come of her tiny, random decision to put that song on her wall. It might make her feel better, if her today was being as rough as usual.

It was the start of something.

The thing about my music: I need an audience. If a song plays in the forest and nobody hears it, did anyone care? I'd long lost touch with the personal pleasure of just making music for me. I'm too hard a task master. I couldn't play or sing well enough to satisfy myself. All those years of judging other people's performances had taken their toll; I wasn't good enough to please me. I've rarely played or sung since I stopped teaching music for a living.

But oddly, other people seem to be kinder to me than I am to myself. They enjoyed my little video. They wanted some more. A little music to cut through the heaviness of dealing with their disease and their treatments and their PTSD, every single day.

They didn't have to ask twice. The next day I posted another little piano tune that I'd taken from the back drawer of my memory.

I needed a few rehearsals this time. 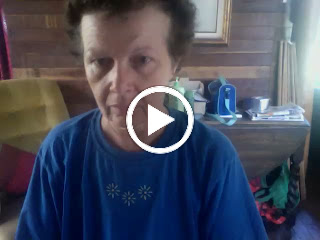 I just needed a bit of encouragement, I guess.

I've made a Facebook page now, where I put up a performance a day. It's not about the quality. I'm never going to have an agent knocking on my door or ten thousand 'likers' of the page. I've managed to shut down my internal critic, the one that would make me do forty five takes and still not have one good enough to post. I'm not listening to the voice that says all your old students will look at this and know you're really crap. That voice has missed the point.

The point is that cancer scars your soul. You're wounded inside, where nobody else can see.

If you just sit there, waiting to feel better, hopelessness comes over you like a cloud and settles all around you. The Scary Man whispers his fearful poison in your ear, day and night. You've been through so much with so much resilience, you've beaten off this bastard for months of your life, and now- when everyone else thinks it's over- you realise it's never over. When everyone thinks you've won, you give up and become a victim, because you're just so tired and gutted.

No you fucking don't.

You find something that heals your soul, and you do it. You get out of the bloody chair and please yourself, because really, all this pleasing everyone else has whiskers on it if you end up empty inside. Why the hell bother? You can't give when you've got nothing left.

You find your inner tiger, and you feed it. Because the tiger is what will keep your life worth living, that life that you've fought so hard to save. Nobody else can feed your soul. The tiger is yours alone. It responds only to what you do, grows fat and healthy again only on what you need.

Here it is Christmas Day, and I'm sitting in a chair writing. I'm not being with the people who might expect me to be with them today, and I'm not cooking up a storm; in fact we've eaten pleasantly, but quite frugally. I'm not pleasing anyone but myself. The tiger says no. Right now I need silence, and a feast of soul food.

I haven't sung yet today, but it'll happen. Having a page set up like that is a commitment to feeding the tiger. Even when I felt flat and uninspired a few days ago, I knew I had to honour the tiger and try to sing.

I felt so much better afterwards.

I called the piano tuner, too. The tiger keeps wincing when my left hand hits the octave that's soooo out of tune. See what I'm doing there? I'm shooting down my own excuses.

And another thing: I really can't play the guitar still. I tried. So when I wanted to sing a Joni Mitchell song and my hand wouldn't cooperate, I opened up the music composition program that Jools got for me years ago instead. I'd barely touched it since she gave it to me; it had opened up a can of worms I couldn't bear to look at, full of old hurts and lost beauty. I taught myself how to use it pretty fast- seen one sequencing program, seen 'em all- and wrote out the guitar part in a couple of hours.

By later that day, I'd started writing some words down for a new song.

The tiger is still purring about that. I didn't write music any more because there was nobody to perform it. I'd forgotten about me.

So- no more forgetting about me. Healing means fixing the intangible as well as the physical. Nobody else can do it for me. I have to make my own tiger-food. All the materials are here. There are no excuses, really.

And now, if you'll excuse me, my piano is calling me.
Posted by Aunt Annie at 9:27 PM No comments: