The Valley of Despond

The hair just had to go.

I'd woken up twice now with my skull tingling and throbbing. It didn't matter what I did with my locks- leave them loose, tie them up, brush them out- I was starting to feel like I wanted to tear them out of my head in handfuls. The sheer weight of my long hair was too much for the dying scalp cells.

I'd told myself I'd cut my hair on Boxing Day. "You'll have hair for Christmas, but not for New Year," Dr Mumbles had said; I thought Boxing Day would be plenty soon enough to take the initiative and steal the Freeloader's power to unnerve me.

But as with most of the best laid plans, that just isn't how things were unfolding. The pain in my bones, though less than on Day Five, continued to torment me day and night. Ferdinand rolled and sank in my guts, demanding treats and churlishly hurling them around when I complied. Seaweed crackers had him turning up his nose and shuddering. Blueberries? Meh. A spoonful of dry Milo glued him to the plughole, leaving me near retching point for the first time then sending me running to the loo.

My teeth felt three sizes too large for my gums; biting down was agony. My parched throat was making me cough, and those sudden spasms threatened to dislodge Ferdinand post-haste from his lodgings below.

Something had to give. There's only so much discomfort a body can take.

The something was always going to be my hair. It didn't feel like it was part of me any more. It had become the enemy, and I needed to cut my losses.

Getting my mind around the whole hairless look first was a little harder than making the call to arms. I tied my locks back (ouch) and played around with my scarves for a while, taking photos and assessing the results. 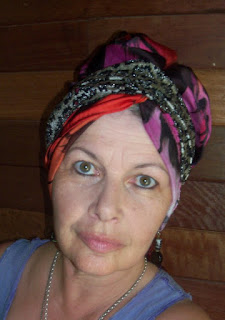 Nothing looked like me, of course. I should know that by now. I looked like Madam Zelda. Cross my palm with silver.

Or, according to one kind friend on Facebook, Liz Taylor. (Flattering, if far-fetched.)

With a wry smile, I recalled Samantha in Sex and the City sitting in the wig shop after her chemo, hurling bitchy comments at the poor harassed salesman- till, at the end of his tether, he reminds her forcefully that it's a wig. It'll never look the same as her real hair.

Just like me, in a turban, will never look the same as me with hair.

(I hear you, Samantha. I don't want to accept it either.)

I tore the scarves off again and sulked on the lounge for a while. Cutting my hair in this mood could be dangerous. And regardless of how much of a bitch I felt like being, I didn't have the bottle to hack my coiffure to pieces before I warned the Bear that his long-haired princess was about to become a goblin. That would be mean.

But the sun started to go down, the man came in and observed my distress- and, bless him, put his finger on the crux of it right away.

"You have to be comfortable," he said.

So I went to the bathroom and turned myself into a punk. 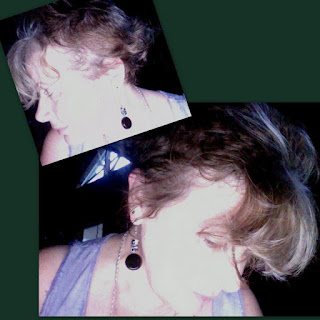 The photo is infinitely flattering of the job I did (amazing what you can do with a decent photo editing program and careful posing). Seriously, I'm practically bald in some spots, and there are all these long wispy bits thrown in. I didn't care.

But I couldn't quite come at cutting my fringe off. That's not the bit that's hurting. It can wait.

The relief was immediate, but sadly didn't guarantee a decent night's sleep. The Bone Factory had other ideas. My back was screaming, my gums howling. I swallowed my Lyrica, which usually knocks me out at least for a while, and closed my eyes.

Nothing. Nothing but pain and more pain.

There's a moment in the chronic, unrelieved pain cycle where you feel like time stops. The dead of night makes a good backdrop for that. You're stranded alone in the Valley of Despond, and the walls are so steep that you know you'll never get out. Nobody can hear you scream in there. There are no answers, because you can no longer think of the questions. You're only aware of time ticking infinitely slowly, while nothing changes.

Lay back. Sat up.

Rocked back and forth.

Lay back. Rolled over.

Almost woke the Bear. Tried not to. What could he do?

Do that routine repeatedly for six or seven hours at a stretch, and you're just about ready for committal in the morning. Because it's not six or seven hours; you know it's not. It's four and a half months in the Valley of Despond, and you've only just started.

Does anybody just quit chemo, I wonder? Does anyone take their bat and their ball and their floating fragments of Freeloader and just go home? I wanted to, in the dead of last night. My self-belief was a non-event. If I wasn't so miserable I would have been furious.

I was well before this. I was doing so well.

By dawn, the rage had resolved itself into a ball of sheer resentment that my pain advice had been inadequate, again. Panadol my arse. I'd taken Panadol all night to no avail. I got on the phone to Dr Mumbles' office.

And got the run-around from his receptionist. You couldn't possibly speak to him until late this afternoon. He's not even in the office yet. I could try to catch him and call you back, but it wouldn't be until much later.

Call me back? There goes a squadron of flying pigs. I've worked with too many bulldog receptionists in my time not to recognise a steel-lined triple-bolted door when I knock on it.

I put the phone down in disgust. Poison 'em and then set 'em free, eh? No Correspondence Will Be Entered Into? Cure the body, screw the mind?

I'm probably being unfair. But being blocked by a fucking secretary when you're in severe pain does that to one.

"Calcium supplements," she said calmly, smiling her beatific smile. "They're better than narcotics for bone pain. I found that out experimenting on myself when I broke my ribs, and I've used them successfully on many patients in different situations since then."

And prescribed the narcotics again, just in case. To keep me sane before the calcium kicks in. I took one at once, and by halfway home I was as high as a kite.

I can do this, I thought.

A few hours later, including a pleasant and much-needed nap, I had cause to remember that nothing about this journey is that easy. The Endone had made me nauseous again, and along with the calcium tablet was already making me feel tightly uncomfortable in the nether regions.

I'd have to start a whole new regime, balancing the side effects of the side effects. Maxolon for the nausea. Fibre supplements for the slow guts. More Laurel and Hardy shows, putting infinite pills into little boxes.

I sighed. Sniffed some mint while I waited for the Maxolon to kick in. And started stretching a new tightrope across the Valley of Despond.